Why homeworking may be less green than the EU thinks

The European Commission is closing half of its offices in Brussels to allow for more teleworking and to walk the talk on its Green Deal, but studies show working from home can create more, not fewer, emissions.

EU civil servants are about to enter a new era. In May 2021, the European Commission, the union’s executive body, announced it will close half its office buildings. The rationale behind this, according to Johannes Hahn, the European Commissioner for Budget and Administration, is to adjust to the new post-Covid norm of working from home and to make the Commission “more green” by reducing building emissions. The assumption that losing offices and avoiding commutes will deliver an emissions reduction seems logical, but the data is less clear cut.

The Commission employs 32,000 people and plans to reduce its 50 buildings around Brussels to 25 within the next ten years. Whether this change will result in emissions savings depends largely on local transport and energy provisions, finds a study published in June 2021 by the UK’s Carbon Trust. In many instances, teleworking causes more emissions because each individual worker’s home needs to be powered, heated and air conditioned, rather than just one shared office space. 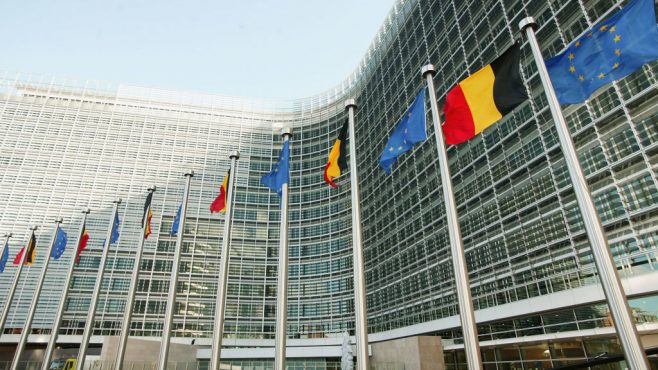 Workers at the European Commission’s Berlaymont headquarters in Brussels will continue partly working from home after the pandemic.
(Photo by Mark Renders/Getty Images).

The situation may be worsened if people can opt to work partly from the office and partly from home, since offices still need to be powered while further emissions are created by people at home.

“While homeworking offers great potential for carbon savings, it is important to understand regional nuances and working patterns, and to identify inefficiencies that increase consumption, to create saving scenarios,” says Andie Stephens, associate director at the Carbon Trust. Emissions savings from teleworking are possible, but it is much more complicated than just telling people to work from home, he says.

The Commission has, until now, concentrated on reducing the climate impact of its offices by spending big sums of money on renovating them in line with the EU energy performance of buildings directive. In 2005, the Commission’s buildings started being monitored by the EU’s own Eco Management and Audit Scheme (EMAS). This approach reduced energy consumption in Commission office buildings by 65%, and related CO2 emissions by 86%, between 2005 and today, largely through energy efficiency improvements and updating buildings.

Vacating buildings is another matter. The Commission plans to work closely with EMAS to close buildings and reorganise working structures in the most energy-efficient way. It says it intends to make better use of “every square metre and make every square metre greener”.

Read the entire article on ENERGYMONITOR.