Overcharging in hospitals: “Enough is enough!”

The staff, the people this institution needs in order to deliver for the European citizens

Facts and shortcomings: an assessment

Luxembourg : What future for an EU agent? 🌹 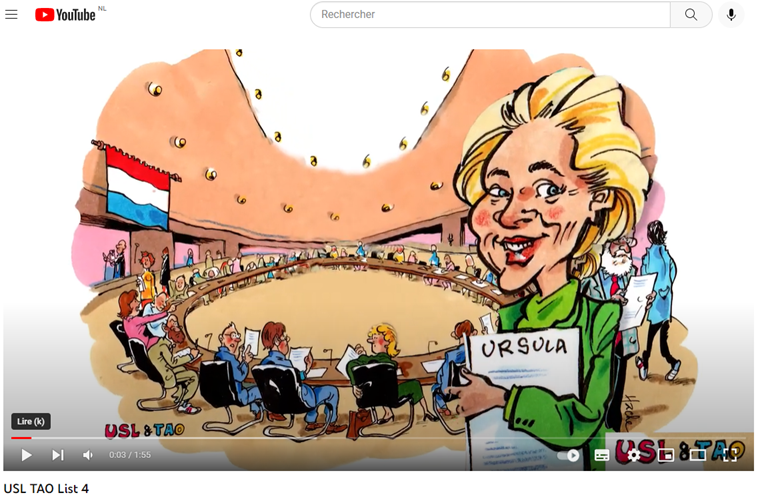 🐘 Overcharging in hospitals: “Enough is enough!”

Despite 2 rulings of the highest judicial authorities of the EU:

– Wattiau judgment of the EU Court of First Instance (2019)

which both condemned a recurrent practice by Luxembourg hospitals to apply an “overpricing” of medical services to members of the JSIS, compared to the official tariffs of the CNS (reserved for Luxembourg nationals), the “Fédération des Hôpitaux Luxembourgeois” (FHL) continues to discriminate against our JSIS and its members!

The Ferlini ruling condemned the overcharging even though there was no agreement justifying it; the Wattiau ruling declared the agreement signed meanwhile between the European Commission, the Luxembourg Government and the FHL – which had established a rule of overcharging for members of the JSIS – as incompatible with the overriding principle of the fundamental EU law of non-discrimination.

USL urgently requests the European Commission, as guarantor of the application of EU law and the jurisprudence of its judiciary

– to launch legal proceedings against those responsible for these illegal practices,

– not to pass on the overcharges in question to the members of the JSIS, but rather to suspend them until a solution is found,

– to provide the necessary legal assistance to members of the JSIS in order to challenge any act of overcharging in the hospital environment, against Luxembourg hospitals before national courts, including a preliminary ruling if necessary.

To this end, USL has decided to create a Task Force “Anti overcharging in Luxembourg hospitals”, open to other trade unions, and invites the staff to transmit any personal experience of this nature!

We pledge to bring to this file all the means required for an effective and urgent solution.

USL listens, acts and gets results. 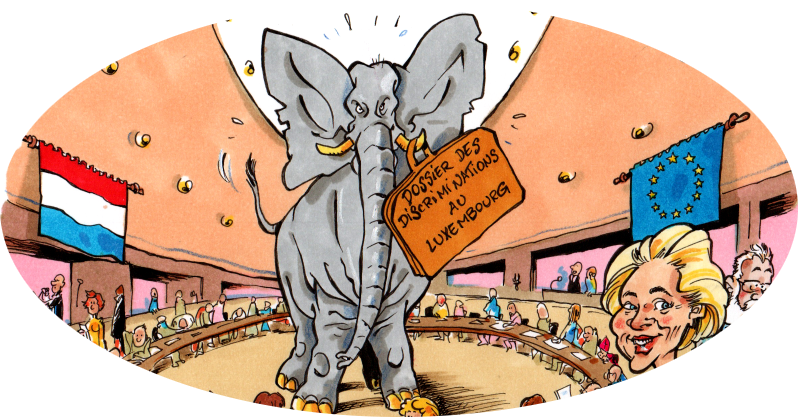 🐘 The staff, the people this institution needs in order to deliver for the European citizens

This is about you!

This is about yourself and the European Commission, your employer, the institution you left your home country to come to work for.

Working for the European Commission is being part of a supranational project that has guaranteed peace and prosperity among its Member states for more than sixty years.  We are aware of its high responsibilities, and of the need to deepen the integration process in the general interest of our nations and its citizens.

The world is changing rapidly, so are our societies, and the challenges the Commission faces are increasingly complex and include the economic crisis, the international security context, the energy supply, among others. To rise to the occasion, this institution needs to have the best people for such high tasks and responsibilities, the “Next Generation of the EU” Civil service!

Our staff has done great efforts in the last years to adapt to the permanent changing political agenda. We are now all involved in a Commission that aims at being greener, more digital, and where the role of telework is bigger every day.

The European Commission must recruit the profiles it needs based on merit and an irreproachable selection process, and must increase its means and engagement to retain all the good people that work here and have already proved to be efficient: but let us be clear: there is work to be done, il y a du boulot!

The “Next Generation EU” Civil service that Europe is in need of must be forged on the basis of a reinvigorated political willingness:

1) to defend publicly our staff;

2) to commit not to contest the staff’s acquired rights;

3) to offer to all motivating career prospects;

4) to foster the emergence of a real intergenerational body, stopping the division between function groups and differences with respect to the date of entry into service.

We know our professional value

We believe in the project the Commission needs to lead

We are willing to continue to work hard

We are aware of our rights

There is a new generation of the EU civil service willing and determined to deliver for the European citizens!

Facts and shortcomings: an assessment

The 2022 promotion exercise ended with the publication of the lists.

Congratulations to all colleagues who were promoted this year!

A promotion is a recognition of efforts made and hard work, so well deserved. However, not all colleagues that feel that they would have deserved a promotion got it…. As a result, 1011 colleagues (539 ADs, 385 ASTs and 87 AST/SCs) filed a complaint because their names were not on the draft promotion list published in June.

Every year the formal promotion procedure starts in April and ends in November. However, a promotion is something to work for every day. It is not so much a right as a reasonable expectation, rewarding merits over the course of a career.

While it is true that the CDR and promotion exercises are separate, what appears in your self-assessment and the dialogue with your reporting officer are essential to determine if you deserve a promotion. The CDRs since your last promotion are the basis for the analysis of your complaint against not being on the draft promotion list.

Hence the importance of explicit laudatory comments on your performance, since merits is one of the three elements recognised in the Staff Regulations as the basis for promotions. The other two are the use of languages and the level of responsibilities that you have.

It is important to remember that filing a complaint doesn’t automatically guarantee a promotion. Only the equivalent of 5% of the exercise promotion quotas can be added to the draft promotion list. As in the previous years, in 2022, this was roughly one out of four complainants in the AD category, one out of five for AST colleagues and only one in 20 in AST/SC.

If you feel that you have been refused a deserved promotion for no real reason, you can still file a complaint under Article 90.2 of the Staff Regulations, as a preliminary condition for a possible judicial action before the EU Court. The Court has set the obligation for the Administration to motivate adequately a decision for non-promotion (see Case T-605/19).

Promoting deserving staff in a fair and transparent way is indispensable for a modern European civil service that serves European citizens as they expect. We therefore call once more on the Administration to tackle the shortcomings of the promotion procedure 2022, to ensure fairness and transparency for all colleagues, by making sure that colleagues in lower grades have fair career opportunities in those DGs where promotion of higher grades is given priority. USL and TAO are ready to support and contribute to these efforts.

We think that the “Report on the Model Promotion Exercise”, drafted jointly … a long time ago, should be put on the table for social dialogue in order to improve the implementation of this important annual exercise for comparing merits and awarding promotions.

This concerns among other:

🐘 Luxembourg : What future for an EU agent? 🌹

Why does this question arise?

The attractiveness of the EU institutions in Luxembourg has been questioned since 2006.

What are the reasons for this?

The difference in the cost of living compared to Brussels, for which there is no compensation, has led to a quantitative and qualitative impoverishment of the staff of the Institutions.

How much is this disparity in purchasing power between the two main seats of the EU institutions?

What are the effects of this?

Several hundred permanent positions have been vacant for years at the European Commission and the European Parliament in Luxembourg.

Who can do something?

What do the Luxembourg political authorities think?

The attractiveness of the EU Institutions in Luxembourg is of great concern to them. This issue is a “State matter” for the Grand Duchy.

For this reason, the Chamber of Deputies unanimously adopted a motion in May 2022 asking the Government to act for the sustainability of the EU services in Luxembourg and for sustainable and non-discriminatory working conditions for the EU staff assigned to them.

USL continues to act with these same objectives.

How do the Commission and the Council of the EU react?

As in our caricature: they know the problem but have decided to ignore it…

How can the staff react?

If they are convinced, as USL is, that the solution lies in equal treatment for staff working in Luxembourg and those working in Brussels and elsewhere, they must express this loud and clear during the elections for the LSC Luxembourg and support List 4 so that the elephant in the room does not continue to be ignored.

Many of you already know us… However, we are addressing to you today as USL candidates for List 4 – USL reinforced by The Independents (TAO) – for the elections to the Local Staff Committee in Luxembourg. These elections will determine who will be your representatives at the LSC and, by extension, the Central Staff Committee, for the next three years. These are the people who will speak on your behalf on issues such as career development, internal competitions, working conditions, European Schools, crèches, health insurance, etc.

The USL reinforced by The Independents (TAO) team, made up of colleagues of various nationalities, age or function groups and DGs, brings together a rich expertise and experience, which reflects precisely the diversity of the EC colleagues they aspire to represent regardless of their category (AD, AST and AST-SC officials, temporary agents and contract agents), or date of entry into service (before or after 2004!). We propose a constructive dialogue which takes into account the specific needs of our working environment and which is also able to motivate, embodying a strong message in favour of an intergenerational association of staff, for the benefit of everyone.

To benefit from this commitment and expertise over the next three years,
vote for List 4: USL reinforced by The Independents (TAO).

We are informed that the staff is invited to vote on a new electoral system for the CLP Luxembourg elections.

USL would like to point out that the current system in place has proved its worth in terms of both stability and alternation.

The two proposals submitted to the General Assembly on May 16th – proposal 1_List1, proposal 2_List3 – aim at a greater proportionality in the election of the members of the CLP.

We, USL, are convinced that no electoral system is perfect, and that all of them can be improved: both the current one and the two new ones proposed.

USL, in the interest of listening and inter-union cooperation, has decided not to oppose a proportional system.

The decision to change the electoral rules belongs to the staff and should not imply a conflictual situation between the unions, which must tackle the real problems that all EU staff assigned to Luxembourg suffer from: the fight against any discrimination must be our absolute priority.

USL will therefore rely on the collective wisdom and invites its members and all staff members to express themselves according to their conscience.

In view of the result of the GA, USL does not exclude – if the status quo should be the conclusion – to make a proposal for a proven proportional electoral system, namely the one currently in force in Brussels and Ispra. This system has been tried and tested and has proven its worth over the years, and therefore enjoys the confidence of the majority of the staff within the institution.

USL calls for a strengthened and efficient inter-union cooperation to face all the discriminations that the staff in place in Luxembourg suffers from: disparity of purchasing power, over-pricing of medical care in hospitals, social dumping to contractual agents, situation in the day-care centres…, and also to face the 3rd Reform of the Statute in preparation as a common inter-institutional and multi-local front.