The autumn brings not just a return to the office, but a return of the cinema festivals, many of them supported if not created upon the initiative of some of our colleagues in the European institutions.

The “Miradas/Blécker” short film competition, organised by the Antonio Machado cultural circle in Luxembourg, closed with a viewing of the finalists on 17 September: https://www.vdl.lu/fr/visiter/art-et-culture/cinema/cinematheque/prix-miradasblecker

The 12th edition of the British and Irish Film Festival (16-25 September) www.bifilmseason.lu. The Chronicle witnessed the opening night: https://chronicle.lu/category/film-festivals/37738-12th-british-irish-film-festival-luxembourg-opens-to-full-house

The Central and Eastern European Film Festival (CinEast), 7-24 October, is already at its 14th edition, and its second hybrid version: https://www.cineast.lu/2021/. More about its rich programme and this year’s theme “Dreams of Escape” below.

Just across the border, but with the collaboration of several cinemas in Luxembourg, the Villerupt Festival (29 October-14 November) is the veteran, reaching its 44th edition: https://festival-villerupt.com/. 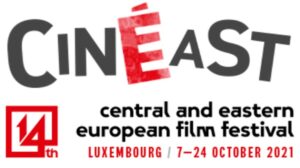 The 14th edition of CinEast will present over 100 screenings of 55 features and 35 short films as well as numerous accompanying events, including concerts, exhibitions and cinédebates, and over 20 guests. This is the second hybrid edition of the festival.

CinEast 2021 will have “Dreams of Escape” as its main theme.

The thematic cycle “Dreams of Escape” will provide a reflection on various forms of our hopes for a change, distraction or getaway, not only physically after months of lockdown, but more generally the wish to escape from the rigid and static social and economic framework by proposing alternatives for the individual and collective future.

The theme will be reflected in numerous films (documentaries and fiction), an extensive photo exhibition and a debate.