Cost of living and attractiveness of the Luxembourg site

For many years, Union Syndicale Luxembourg (USL) has been sounding the alarm about the growing disparity in purchasing power between EU staff based in Luxembourg and those based elsewhere in the world, in Europe and outside the Union.

At the root of this disparity is the absence, in the case of the Luxembourg site, of a mechanism to compensate for the difference in the cost of living between Luxembourg and the reference country, Belgium.

Indeed, as can be seen in the image below, the cost of living varies greatly within Europe, and even more so throughout the world 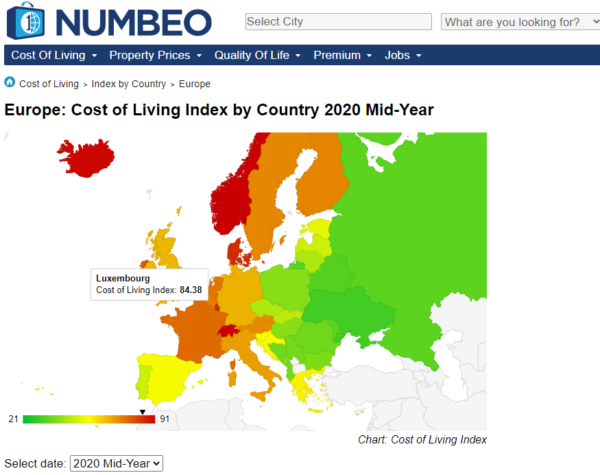 The benchmark source of comparative data is Eurostat (DG ESTAT). This should be a fundamental axiom of European institutional geometry. But the Commission itself has weakened this axiomatic truth by choosing to entrust a study on the cost of living in 2018 not to Eurostat, but to the private company AirInc, a subsidiary of the Japanese group Relo Holdings.

We have therefore chosen to illustrate this point with figures from Numbeo, a very popular collaborative site. The results do not differ much from those of Eurostat and other sources, although the methodologies may vary.

The beauty of the Numbeo approach is that it presents separately a “rent index” (the cost of housing) and a “cost of living (excluding rent)”.

We note that, according to Numbeo :

If the differences in the cost of living between Belgium on the one hand and Denmark, France, or other EU countries on the other hand do not cause serious problems, it is because the European Union strives to ensure equal treatment of its staff wherever they are assigned. For all locations where EU staff are posted there is a mechanism to compensate for differences in the cost of living.

This mechanism is called the ‘weighting’ and it applies worldwide, from Denmark to Bulgaria and even beyond, for staff representing the Union in the United States or Australia for example.

“All over the world’? No, because one country is explicitly excluded: Luxembourg (Art. 64§3 of the Staff Regulations). The differences in the cost of living between Luxembourg and Belgium, even when the cost of housing is excluded, are the only ones not to be compensated by a “weighting”.

All the trade unions and professional organisations agree that this is firstly an injustice and secondly a serious handicap for the attractiveness of the Luxembourg site. We also agree on the need to find an urgent solution to this problem.

As for the solution, the private company AirInc, a subsidiary of the Japanese group Relo Holdings, had put forward the idea of an accommodation allowance. Notwithstanding the practicalities of implementing such an allowance, the USL has several questions: